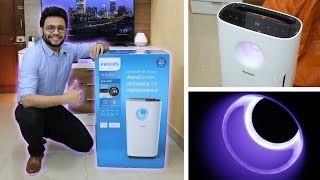 The HEPA filter replace warning starting coming only 3 months of running, the only reason I could think of is that it was a used product with some running hours already consumed, else this couldn't have happened, I have another air purifier of the same model which I have been running for more than a year and the Hepa filter still doesn't need replacement, they both run in the same house and under same conditions
AK - July 26, 2018
Been a couple of months using it, you can feel the difference in the air. But if you use it in a small room, you may feel lack of oxygen after a few hours. might need to keep the room lightly ventilated if it is a small room (which kind of defeats the purpose). brings down the level from 180 to 18 within half an hour if used in a room of 20sq.m. at a speed of 5. Takes an hour to bring down the level from 180-200 to 30 in a room of 60sq.m. at a speed of 5, takes time to bring the levels below 30 at speeds 3 or below in a room of 60sq.m. have to clean the the outermost layer every month, you can lightly brush the hepa filter layer also for increasing life.A bit big in size, wife finds a bit difficult to move from one room to another.A good product overall.
ABHISHEK AGARWAL - December 13, 2017
Have been using since one month now, I run it in AL mode at night and it has improved the sleep quality for me & my child, both of us had allergic asthmatic attacks during night and difficulty in breathing sometimes but this product has made the nights much better. I bought a higher capacity one to keep it at the center of 2 of my bedroom which are connected by a center door, it works well for both rooms. One thing to note is that u need to have windows closed, if you allow external air come in then the pm count never goes down below 25 (blue color) , I keep the sliding window open by 4 inch only to avoid suffocation and my rooms are quite large in size so at morning the pm count is around 1-2.
rahul - October 7, 2018
SaveSavedRemoved 0

Rs. 7,299
Added to wishlistRemoved from wishlist 0

Rs. 14,699
Added to wishlistRemoved from wishlist 0

Added to wishlistRemoved from wishlist 0